Among Bruce Lee’s many world wide accomplishments, world records, international movies, contribution to all martial arts, creator of Jeet Kune Do JKD martial arts and so much more; Bruce Lee is also the Father of Mixed Martial Arts MMA.

Many martial arts experts have agreed about Bruce Lee Being the Father of MMA. Such a person is Dana White the president of UFC Mixed Martial Arts MMA that has been quoted many times as stating that without a doubt Bruce Lee was the father of MMA. In one of his interviews he very clearly explained why Bruce Lee started the concept of what is MMA today.  Dana White said:

“It’s a little tough for the traditional martial artists to swallow, because one system doesn’t do it. You’ve got to cross-train in many different systems. Actually, the father of mixed martial arts, if you will, was Bruce Lee. If you look at the way Bruce Lee trained, the way he fought, and many of the things he wrote, he said the perfect style was no style. You take a little something from everything. You take the good things from every different discipline, use what works, and you throw the rest away.”(Quote Source Article: Dana White and the future of UFC) 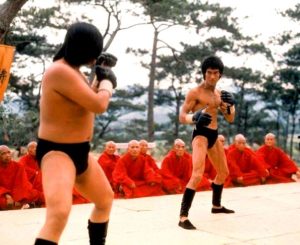 Also, for the people that have studied the philosophy and martial art technique requirements for the development of Bruce Lee’s martial arts Jeet Kune Do, know that Mixed Martial Arts MMA uses many of its concepts and philosophies. Bruce Lee was always trying to make his Jeet Kune Do more and more efficient, powerful and versatile against any other traditional martial art styles. Jeet Kune Do is always in a state of evolving, improving and adapting against any other styles of fighting. This is one of the main reasons Bruce Lee did not want to make Jeet Kune Do into a strict traditional martial arts style. Jeet Kune Do’s versatility and adaptivility to fight at kicking distance, punching distance and on the ground is the basis of MMA fighting style.