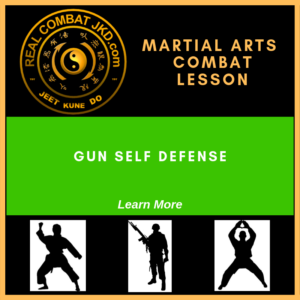 This shared video is one of the best and most realistic gun self defense simulation videos. It is excellent for information purposes. Only a few gun self defense points about the video will be discussed in this article. Video source ufpro.com.

People and especially martial artist like to fantasize about easily disarming a gun from an attacker. But this video will show that gun self defense disarms from an attacker is like playing Russian Roulette. Sometimes you will be successful and sometimes you will Fail or Die. Your probabilities of surviving a gun self defense disarm without injury or death greatly increase with your level of frequent training in the most realistic method possible. If you do not frequently and consistently practice your martial arts attributes and apply them to your gun self defense training, then chances of your survival are minimal.

This Gun Self Defense article and video shows:

For a person to successfully execute a gun self defense evasion from a person pointing a gun close to you without being shot.

Scenarios for gun self defense:

Gun pointed in front of you near your chest

Gun pointed in front of you near your face

Gun pointed back of you near your middle back 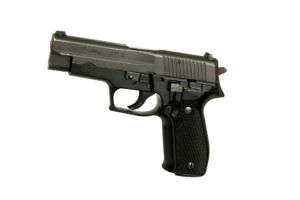 Gun self defense against single action guns are less successful in evading getting shot and therefore seriously hurt or dead.

Gun self defense against double action guns are more successful in evading getting shot and therefore seriously hurt or dead.

Remember when a gun is pointed at you, it is very difficult to try to see if it is a single action or double action type gun since your fear and adrenaline are way high. In addition the attacker’s gun may have a lighter trigger that what was used in this test, therefore increasing the chances of being shot or killed.

Now, does this test indicate that it is hopeless to try to evade being shot by an attacker with a gun? No it does not, but it does show that proper frequent training plus other top level martial arts skills are required to increase your survival rate. The key is proper and frequent realistic training.

If you would like to see the results of a Gun vs Knife realistic simulation test just go to https://realcombatjkd.com/martial-arts/gun-vs-knife/